Canton La Laguna is a small community of 157 families. The Civil War years (1979-1992) left the region battered and with few resources. While a small percentage of community members stayed during the civil war, suffering through the extended armed conflict, the majority of the citizens fled, with some returning gradually over the course of the past 23 years since the signing of the Peace Accords that ended the war. The main economic activities in the community include almost exclusively agriculture, with some folks making and selling artisanal crafts. Tourism is growing in the region, however, and demand for artisanal work is increasing, providing an opportunity for women and youth in the community to earn a modest income.

Once a small initiative begun by three women of the community, the La Laguna artisan group has grown and now has the potential to make a direct, substantial difference in the lives of eighteen community members. Most members already have a basis in crochet, but this project will strengthen their skills, allowing them to enter into more formal markets such as clothing stores. With additional training in leadership, gender equality, and business practices, the group will have the technical training necessary to ensure the sustainability of the artisan group, providing them with a stable source of income.

The women have completed their crochet trainings and have already begun selling their crocheted shirts at various events and markets through the community.The instructor was so impressed with the group that she joined the artisan cooperative herself, allowing the group to enter more formal markets and fill larger orders. The women also completed their leadership, gender, and business workshops, where they learned about teamwork, the importance of high self-esteem, and basic accounting principles. The women have become more creative and self confident throughout the project and have started to create their own designs.

As part of World Connect's Kids Connect program, students at Community Partnership Charter Middle School in Brooklyn, NY supported the artisan group through various fundraisers. Through emails and Skype, both groups were able to interact and communicate with each other. To thank the students for raising over $200 for their artisan group, the women sent some of their crocheted skirts, hats and scarves to middle school.

"The project has been an empowering experience for its female participants. Not only did these women learn a new marketable skill, but they also expanded their worldview through interacting with youth from NYC through Kid's Connect. They are now more confident than ever before and ready to sell their goods in fairs and the local market." - Amanda, Peace Corps Volunteer

"I am very grateful for this training because now I can make goods to sell to help support my family." - Project Participant 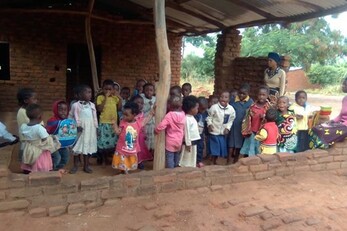